To share your memory on the wall of Rev. Noel Nelson, sign in using one of the following options:

Provide comfort for the family by sending flowers or planting a tree in memory of Rev. Noel Nelson

Provide comfort for the family by sending flowers or planting a tree in memory of Rev. Noel Nelson

On March 20, 1993, Noel was united in marriage to Judith E. Wall and they shared twenty-seven years together.

In addition to Noel’s parents, he was preceded in death by his step mother, Alice Anderson Nelson; sister, Jennifer Bullock; and many other dear family members.

Noel had seven younger sisters and one brother. Being the eldest, he was always looked up to by his siblings, who he loved dearly. Noel had his first job, a paper route, when he was only eight years old. His strong work ethic started at a young age, as well as his love for reading and learning.

Noel met his beloved wife, Judy at the First Assembly of God Church in Potosi, where he previously served as Worship Leader. Noel went on to earn his masters degree in Christian Counseling and ministry. He served as pastor of Park Hills Nazarene Church for eight years.

Noel had many hobbies and interests, including, traveling with his wife, reading and collecting books, studying the Bible, writing sermons, his Japanese Chin Dogs, as well as a great love for a good piece of cheese cake. Above all, Noel was a true servant of God, and he always let his light shine to anyone he met. He was a wonderful husband, father, grandfather, brother, and mentor to so many.

Noel proudly served in the United States Air Force from January 18, 1962 to December 16, 1965. Noel also served in the Navy from March 17, 1977 to April 16, 1984. Noel will receive full military honors consisting of flag folding and presentation, gun salute and TAPS.

In lieu of flowers, memorial contributions are directed to the Parkinson’s Association,135 Parkinson Avenue, Staten Island, NY 10305. Envelopes will be available at the funeral home.

Funeral arrangements were respectfully entrusted to the care and direction of DeClue Funeral Home.
Read Less

To send flowers to the family or plant a tree in memory of Rev. Noel Junior Nelson, please visit our Heartfelt Sympathies Store.

Donations are being accepted for: PARKINSONS RESEARCH AND EDUCATION FOUNDATION INC.

We encourage you to share your most beloved memories of Rev. Noel here, so that the family and other loved ones can always see it. You can upload cherished photographs, or share your favorite stories, and can even comment on those shared by others.

Sir you and your family are in my thoughts and prayers. I pray that you family's love and strength will provide great support during this time.
Kimerly Chillers, ADCO MOARNG
Comment Share
Share via:
KB

Posted Jul 13, 2020 at 11:40am
Very sorry to hear about you and your families loss Sir. Sending thoughts and prayers during this time. - SSG Katelyn Burkhart, MO RRBN
Comment Share
Share via:
HS

Posted Jul 13, 2020 at 08:43am
Condolences from The Missouri Recruiting and Retention Battalion.

Flowers were purchased for the family of Rev. Noel Nelson. Send Flowers

Posted Jul 12, 2020 at 07:51pm
Wish we could be there to hug you and help celebrate the amazing man that Noel was. Our thoughts and prayers are with you. We love you all. 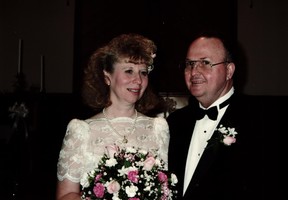