To share your memory on the wall of Ruth Kennedy, sign in using one of the following options:

In addition to her father and mother, Ruth was preceded in death by four brothers: Alvin, Leon, Clinton and John Hawkins.

A Funeral Service will be held on Tuesday, July 23, 2019 in the DeClue Memorial Chapel with Pastor Rick Posey officiating.

Interment will follow at White Oak Grove Cemetery. Funeral arrangements were respectfully entrusted to the care and direction of the DeClue Funeral Home.
Read Less

To send flowers to the family or plant a tree in memory of Ruth Evelyn Kennedy (Hawkins), please visit our Heartfelt Sympathies Store.

We encourage you to share your most beloved memories of Ruth here, so that the family and other loved ones can always see it. You can upload cherished photographs, or share your favorite stories, and can even comment on those shared by others.

Posted Jul 21, 2019 at 08:50pm
I love each and every one of you and will miss Aunt Ruth. The highlight of my young teen years was a visit to St. Louis with my friend Pam Cooper. Aunt Ruth treated us as her own and gave me one of the best weeks of my life. My first airplane ride was the ride home from this wonderful week with Aunt Ruth & family. My prayers are with each of you that you experience a comfort beyond human understanding.
Pam Boyd
Comment Share
Share via:
HS

Posted Jul 21, 2019 at 10:56am
Please accept our most heartfelt sympathies for your loss... Our thoughts are with you and your family during this difficult time.

Gracious Lavender Basket was purchased for the family of Ruth Kennedy. Send Flowers 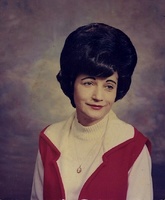