To share your memory on the wall of Janie Yount, sign in using one of the following options:

Provide comfort for the family of Janie Yount with a meaningful gesture of sympathy.

In addition to her parents, Janie was preceded in death by her husband, Marvin Leon Yount; daughter, Patricia Coffman; son-in-law, Bobby Coffman; and two sisters-in-law: Verna May Welker and Virgie Massie Welker.

A Funeral Service will be held on Sunday at 5 PM held in the DeClue Chapel. Interment will follow in the Antioch Cemetery.

Funeral arrangements were respectfully entrusted into the care and direction of the DeClue Funeral Home, Potosi.
Read Less

To send flowers to the family or plant a tree in memory of Janie Maebell Yount (Welker), please visit our Heartfelt Sympathies Store.

We encourage you to share your most beloved memories of Janie here, so that the family and other loved ones can always see it. You can upload cherished photographs, or share your favorite stories, and can even comment on those shared by others.

Posted May 29, 2019 at 03:00pm
We would like to express our sincere condolences to you and your family. With deep sympathy, we share your sorrow, after the tears have dried and the goodbyes have been said, all we have to hold onto are the happy memories that we’ve shared with our loved ones who have passed, this is what keeps them alive in our hearts and in our minds, and they will continue to live on, through us. May God give you the strength to endure the pain you are going through and may he embrace you and comfort your family during this difficult time."Jesus said to her: 'I am the resurrection and the life. The one who exercises faith in me, even though he dies, will come to life.'"-John 11:25
Comment Share
Share via:

Posted May 24, 2019 at 11:51pm
Many special memories of my Palmer school mate and friend for all these years. Feel like she was another sister.. Raised our children together even had our first child just twelve hours apart and even named them Patricia. Will miss her terribly -but know she is now pain-free.
Comment Share
Share via: 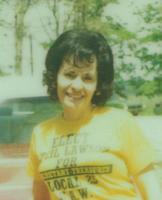