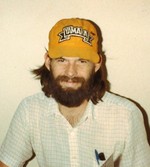 Kenneth Richard Paul, Sr. of Ironton, Missouri, passed away on Friday, May 3, 2019 at his residence at the age of sixty. Kenneth was born on July 27, 1958 in Potosi, Missouri, a son of the late Raymond and Mae Paul.

Kenneth was preceded in death by his parents, Raymond and Mae Paul.

A Memorial Service will follow on Friday beginning at 3:00 PM held in the DeClue Memorial Chapel.

Funeral Arrangements were respectfully entrusted to the care and direction of the DeClue Funeral Home.